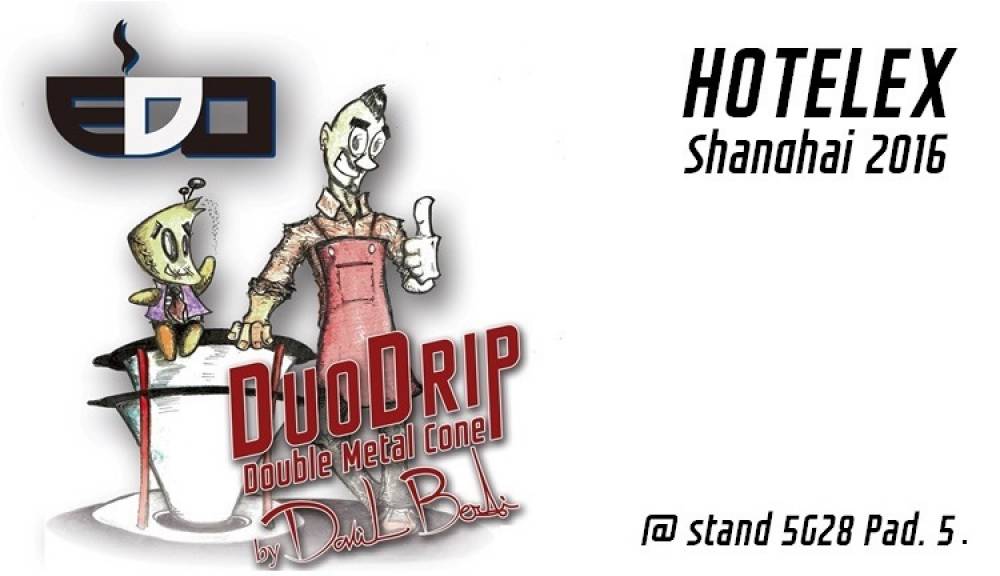 On this occasion will be launched the first product of EDO branded products: the DuoDrip Metal Double Cone, designed by the super-barista David Berti, who will compete in Shanghai for the title of Champion of Coffee in Good Spirits 2016.

Davide, Ibrik World Champion in 2015, has already caused a sensation in Rimini on the occasion of the CIGS Italian final competing with DuoDrip.

The DuoDrip is an extraction system (for percolation in the upper cone, for irroration in the lower cone) that surprised for the ability to use two different blend, to enrich them with spices and fruits and, contextually, to eliminate the pre-infusion and avoid over-extraction (so to cancel the bitterness of the coffee).

We will be at Hotelex at booth 5G28 (Hall 5), hosted by from Nuova Ricambi.

At the stand you will be able to have all the information on the double cone and take advantage of the presence of Davide to the stand bar, see him use DuoDrip and sample one of the coffee-based cocktails that have made him famous.

WOC 2022: everything is ready to restart

Sigep 2022 is upon us: everything is ready for the Italian Championships of coffee professionals

Sigep 2022 is upon us: everything is ready for the Italian Championships of coffee professionals

We wish you a great Summer!